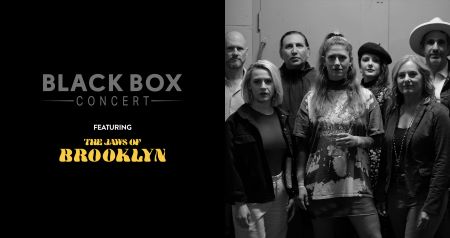 The Jaws of Brooklyn formed when 3 members of Radio Raheem (Zia Uddin-Drums, Paul Christofferson-Bass, Bryan Cohen-Guitar) met singer Lindsay Love during the height of the COVID pandemic in August of 2020 in Seattle. Working together we recorded a series 60’s flavored rock n roll/soul demos in Bryan’s basement with background vocal contributions from Lauren Cervantes of Black Pumas and keyboards from Melissa Montalto of Funky 2 Death. The demos caught the ear of Ben Tanner, keyboardist with Alabama Shakes and Chris Seefried writer/producer of Fitz and the Tantrums and Lady Blackbird.

Ben agreed to produce the record and Chris agreed to co-write 2 tunes and produce the lead vocal on one of those tunes. In May we traveled to Florence, Alabama – Sun Drop Studios - and cut our debut record The Shoals. Ben played keys and Alabama Shakes/Brittney Howard vocalists Shanay Johnson and Karita Law added their voices for background vocals. Our sound is a slab of 60’s inspired Rock and Soul with lots of fun percussion and simple arrangements.

We plan to release our debut album in Winter of 2022 with single releases planned for the Fall of 2021.

Last thing. The name. We are based in Seattle. We recorded in Florence Alabama. Yet we are called Jaws of Brooklyn?  Before we met our singer –  4 years ago, Zia, Paul and Bryan ended up in Brooklyn mixing a couple song demos that were reworked for Jaws of Brooklyn. After a fun night of romping through Brooklyn we picked the name – Jaws of Brooklyn.